What only ambitious business owners know about PR 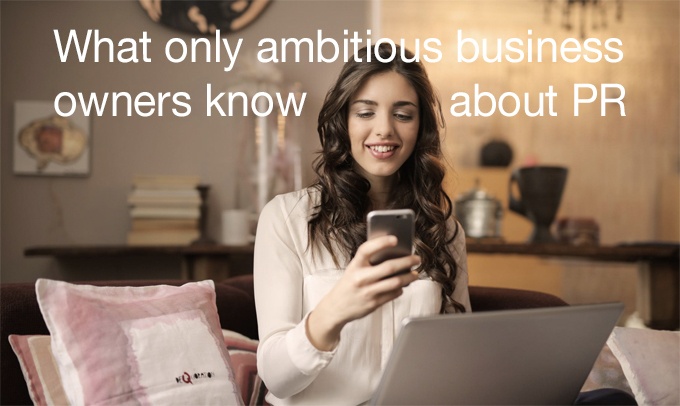 Grab a seat, and discover what only ambitious business owners know about PR., it might inspire you to want to know more about doing PR yourself or having someone do it for you as your time is precious right? .. Absolutely! With that in mind, let me get started..

It’s the start of 2019, and you have realised that you are a big fish in a small pond…but you know that..

In our attention-grabbing world that we live in, media coverage is something that helps you to stand out above the noise of the internet and social media. In 2018, more people notice you when you have been in the press be it local, regional, national or international, you get noticed!

This makes sense, as even your local newspaper will have a reach far greater than most people’s email lists, or online networks; unless you are called the Women Inspire Network, Mumpreneurs or GowithThePro! .

For example: when you get into the national press, such as when my client Annabel Kaye who was featured on BBC Breakfast, we are talking about a reach close to half a million; without even counting the iplayer reach, yes really!

Yes, very true because people see you on the television, hear you on the radio or read about you in their newspaper, magazine or on a website and start to take you far more seriously. Yes really.

PR typically means that people sign up to your lists, book a call with you and start following you across social media.

This is why so many people do PR, as it is a powerful way of generating leads for their business. For example, when my client Shan Marshall was featured in a national magazine, she increased her email list by a third! Yes really; and ambitious business owners know this!

When it comes to being in the media, ambitious business owners know that PR is a very different animal to marketing! They know that when they go into the media they have no or very little control over what happens.

They know that they just need to give the media what they want; be it a few sentences, via email, or a five-minute chat on air in with Vanessa Feltz or on with Jane Garvey on Radio Four’s Woman’s hour.

Ambitious business owners know that they need big knickers because they will not be able to control the outcome and have to surrender to the process and just see what happens.

Very occasionally will they be allowed to check over a piece of written journalism, but mostly they just have to let go and wait for it to be published or featured. So, a lot of courage is required.

These ambitious business owners know too that they could be misquoted too, like when my client was quoted in a celebrity piece early this year in the Daily Mail, she was upset that she sounded heartless; those who know her know that she is not really like that it was just good for that story! Yes really.

By this I mean that people suddenly, in a sea of therapists in the world, who might well have the same experience as you, they see you quoted in Stylist magazine about the Psychology of Sharing, or hear about you delivering a shopping addiction workshop for IZettle in London, and suddenly you have the media start to chase you.

This is what happened to my client Sally Baker in the past few months. Yes really. And now, she gets paid PR opportunities more and more as she’s an established authority!

For example: in April of last year, I sent out a tweet by Annabel Kaye randomly and without permission, about GDPR, as she was and still is the only GDPR expert I knew at the time and who I knew made sense.

That tweet got Annabel Kaye booked on the BBC Radio Four’s Money Box show, on a panel talking about GDPR (YES REALLY AMAZING REALLY!! ) including a representative from the Information Commissioner’s Offer. Yes really.

Yes, this is how PR works, once the media can see that you are a reliable source and that you get out of your own way and give them and their audience what they want you will get rebooked and they will come to you, which of course ambitious business owners know only too well.

So, if you would like to supercharge your own PR for 2019, get in touch  carrie@theblondepreneur.com

” I’ve only been working with Carrie a month or so and I’ve been in one national newspaper and due to be in another. It’s by no means a short game and I’ve got lots of work to do but if you follow what Carrie says and do the work, you’ll reap what you sow. ” @Louise Cartwright-Orr

“Since I began working with Carrie my press exposure has radically increased in the ultra-competitive arena of the London Press and with some National coverage too. I’m very impressed with how connected she is. But, it’s not just press, as I’ve appeared as an expert guest in three online summits in my field plus a couple of great podcasts – all of which has increased the numbers signing up to my site and raised my profile.

I have now been involved in paid Corporate PR opportunities and am regularly being head-hunted for my views now from the media, and being paid too! Carrie has an ability to see the bigger picture which is vital for people like my needing to explore all the aspects of my niche.” @Sally Baker http://www.workingonthebody.com

11 truths about PR you need to know

How to stop the media from ghosting you

This website uses cookies to improve your experience while you navigate through the website. Out of these, the cookies that are categorized as necessary are stored on your browser as they are essential for the working of basic functionalities of the website. We also use third-party cookies that help us analyze and understand how you use this website. These cookies will be stored in your browser only with your consent. You also have the option to opt-out of these cookies. But opting out of some of these cookies may affect your browsing experience.
Necessary Always Enabled

Any cookies that may not be particularly necessary for the website to function and is used specifically to collect user personal data via analytics, ads, other embedded contents are termed as non-necessary cookies. It is mandatory to procure user consent prior to running these cookies on your website.